Kevin Frazier is a co-host of Entertainment Tonight and the founder and Owner of the leading urban entertainment website HipHollywood.com. He was the first to host both Dan Patrick studios on the East and West coasts. 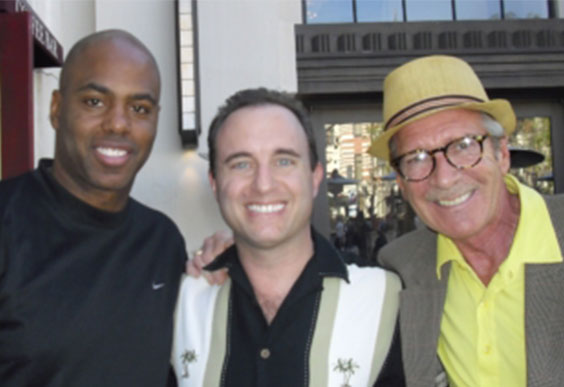 Who is Kevin Frazier

>>According to: https://www.geni.com/people/Kevin-Frazier/6000000033559505899
He made guest appearances on America's Next Top Model, Flavor of Love Girls: Charm School and Hell's Kitchen. Frazier is also a forum guest on Jim Rome Is Burning.

Kevin Frazier (born May 20, 1964) is a co-host of Entertainment Tonight and co-host of CNET TV's Hooked Up alongside Brian Tong. Frazier has worked as an anchor at Fox 19 in Cincinnati WXIX-TV as well as play-by-play commentary for the University of Cincinnati Bearcats basketball team from 1993-1995 as well as Fox Sports Net, later ESPN, where he hosted SportsCenter and a multitude of National Basketball Association themed programming (including NBA Shootaround, NBA Fastbreak and NBA Fastbreak Tuesday). From 2004–2011, he was a correspondent for Entertainment Tonight as well as a fill-in host, and from 2011-2014, was a co-host of The Insider. Frazier is also the host of Game Changers on the CBS Dream Team airing nationally every Saturday morning.

He hosted "Breakfast at the Open" on the Tennis Channel along with Lindsay Davenport for the 2009 U.S. Open and acting as a tennis correspondent from the Los Angeles studio. He also appeared on American Idol.

He was added to Versus College Football Central studio staff in October 2010.

In January 10–12, 2011 Frazier filled in on "The Dan Patrick Show" for Dan Patrick who was working at the national championship Oregon vs. Auburn Football game.

In making the announcement, Bell Blue said, "Kevin has been an integral part of the ET/Insider family for seven years. He is one of the most respected correspondents in entertainment news with incredible sources and connections that will be put to good use as co-anchor of The Insider."

On September 1, 2011, Frazier was named the lead studio anchor for College Football on FX and Fox Sports Net and will be paired with analyst Marcus Allen for the 2011 season.

Personal life[edit] Kevin Frazier attended Hammond High School in Columbia, Maryland. He went on to Hampton University. He has two sons with wife Yasmin Cader, Shane and Reece Cader (born July 5, 2010), and a son Tony from a previous relationship.
Work With NoahCheck Out Noah's Programs