Joel Scott Osteen is an American preacher and televangelist. He is the Senior Pastor of Lakewood Church, in Houston, Texas. Osteen’s televised sermons are seen by over 7 million viewers weekly and over 20 million monthly in over 100 countries. 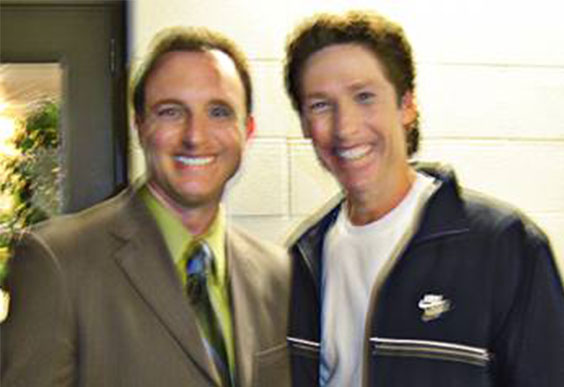 Who is Joel Osteen

>>According to:  https://www.joelosteen.com/Pages/AboutJoel.aspx
Raised in Houston, Texas, with a loving family of seven and world-renowned parents in full-time ministry, Joel Osteen never imagined that he would follow so closely in his father’s footsteps. As a young man, his training and interests were behind the scenes in television production though he was close to his father in ministry.

"There’s no greater feeling than being able to help people rise higher and overcome something and feel better about themselves. I think that we’re all made to help others, to lift people up.”   - Joel Osteen

His father always encouraged him to preach, but Joel would politely decline time and time again until one day in October 1999 when his father was admitted to the hospital with kidney complications. Joel finally agreed to preach the next Sunday, and his father passed the following week. Joel’s first sermon was the last his father ever heard. Joel and his wife, Victoria, were suddenly thrust into full-time leadership of Lakewood Church.

A Global Landmark
Within a year, the weekly service attendance grew from an average of 5,000 to more than 28,000, and additional services were added to accommodate the unprecedented growth. By 2001, according to Forbes magazine, Lakewood had grown to be the largest non-denominational church in America.

In 2003, Lakewood Church acquired the Compaq Center, former home of the NBA’s Houston Rockets. The next 18 months were spent renovating the arena, and on July 15th, 2005, held the first of seven weekly worship services in the new 16,000-seat auditorium. That first week, Lakewood added over 10,000 new members, and within a year became one of the most popular out-of-town visitor destinations in Houston. Over the next few years, Lakewood continued its growth and currently draws more than 45,000 weekly attendees.

Reaching a New Generation with a Message of Hope
Today the ministry is radically impacting lives all over the world through live, televised, and online church services. Each week, Joel’s sermons are broadcast by television into every U.S. television market and to over 100 nations around the world. In addition, Joel’s weekly sermons are streamed live over the internet allowing his inspirational messages to reach into virtually every nation.

“Half the people who watch us don’t go to church,” he says. “And so that was our goal: How do we get outside of the church? I want to talk to the people who think, I’m not a religious person. When Jesus was here, you know he didn’t stay in the synagogue. He went out in the marketplace, and so that’s what we try to do.”   - Joel Osteen

According to several sources, he has become the most watched inspirational figure in America, and in 2014, Sirius XM launched Joel Osteen Radio, (#128) a channel dedicated to the inspirational messages of Joel and Victoria. Additionally, over the past eight years, more than two million people have attended Joel and Victoria’s Night of Hope events across the U.S. and around the world.
Work With NoahCheck Out Noah's Programs