“Noah speaks the language we all want to understand: how to make the most of your life and career.”

Swim With the Sharks Without Being Eaten Alive 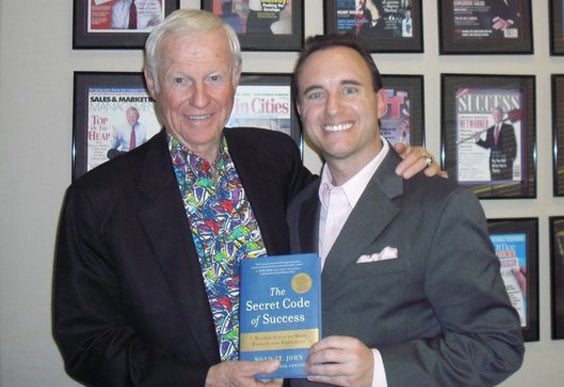 Who is Harvey Mackay

Harvey Mackay is a businessman, author and syndicated columnist with Universal Uclick. His weekly column gives career and inspirational advice and is featured in over 100 newspapers.

>>According to: https://harveymackay.com/about/
Harvey Mackay is a seven-time, New York Times best-selling author of "Swim With The Sharks Without Being Eaten Alive", and "Beware the Naked Man Who Offers You His Shirt." Both books are among the top 15 inspirational business books of all time, according to the New York Times. In total, Harvey’s books have sold 10 million copies worldwide, translated into 46 languages and sold in 80 countries. Harvey is also a nationally syndicated columnist for United Feature Syndicate. His weekly articles appear in nearly 100 newspapers across the country.

Harvey Mackay is one of America’s most popular and entertaining business speakers. Toastmasters International named him one of the top five speakers in the world along with Tony Robbins and Governor Mario Cuomo. He has spoken, weekly, to Fortune 1000 companies around the world for more than 30 years.

At age 27, Harvey Mackay purchased a small, failing envelope company that has grown to a $100 million business. MackayMitchell Envelope Company is one of the nation’s major envelope manufacturers, producing 25 million envelopes a day. Currently, they employ over 450 people. As chairman, Harvey’s philosophy is engrained in the company, beginning with its motto: Do what you love, love what you do and deliver more than you promise.

NOT JUST A BUSINESSMAN

Harvey loves to stay involved in the community and currently sits on a number of boards. That includes the Minnesota Orchestra and formerly as the Director for the Robert Redford Sundance Institute and the University of Minnesota Carlson School of Management to name only a few. He was a guest lecturer and commencement speaker at various universities and business schools. This includes Harvard, Stanford, University of Michigan, Cornell, Wharton, and Penn State.

In spite of his hectic schedule, Harvey still finds plenty of time for family and fun. He’s an avid golfer (9.4 index) and recently won the Super Senior Men’s Championship at The Estancia Golf Club in Scottsdale.

He and his wife, Carol Ann, have been married for over 50 years, and enjoy spending time with their 11 grandchildren. They are avid travelers, having recently returned from an 8-country CEO tour of the Dalmatian Coast.

He is among the top 30 thought leaders on leadership by the American Management Association. Others on the list include Jack Welch, Sir Richard Branson and John Maxwell.

“One thing I know for sure … Harvey Mackay’s new book delivers more than it promises. Forget the theory … it’s filled with practical, down-to-earth advice mixed with meaningful anecdotes that produced value to the reader.”
Work With NoahCheck Out Noah's Programs